A modular immersion tube was developed for the systematic investigation of the influences on the flow. The modular design divides the mass flow into five chambers. So that the partial flows can be individually adjusted from each other, each chamber has a separate pump. This immersion tube system was simulated in a physical water model as well as in a CFD model. The dimensions correspond to those of an industrial plant. In the water model, the velocity within a quasi-two-dimensional plane is determined temporally resolved according to magnitude and direction by the use of optical measuring methods using laser technology. The course of the bath mirror surface was investigated using image-processing measuring methods and ultrasonic sensors. 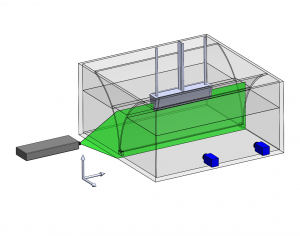 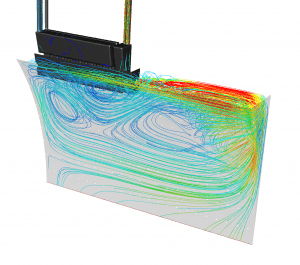 During the casting process, the molten steel, which initially has a temperature of approx. 1550 °C, solidifies on the cooled casting rolls and leaves the plant as a solid strip. The solidification has a strong influence on the formation of the flow. Since the phase transformation in the water model cannot be realized, these effects are investigated with numerical simulations. Based on the simulation results, conclusions can be drawn about the behaviour of the flow in the original process. In this way it is possible to identify in advance and avoid areas in which overheating occurs or contamination accumulates.

The project was funded by the Deutsche Forschungsgemeinschaft (DFG) under the reference number PF 394/20-1.